Male vs. female voice-overs: which one to choose? Plus Accent Network investigation

Many companies face the same problem: deciding whether to choose a male or female voice for a new project. Today there are thousands of voice-over talents, so the decision can become an issue. We are not talking about accents or ways that an artist manages his voice, we are talking about the gender – is it better to use a male or female voice talent? Choosing the voice gender can alter your message and influence effectiveness.

Your product or service

If your product or service is connected with beauty, home appliances and babies, then a female voice will be the better choice. If you sell something related to cars, computers or new gadgets, then a male voice will be more suitable.

Who will use your product? Is your target audience women? What are the purposes of your product? If you sell tools and 80% of your customers are men, the decision is clear.

Men’s voices tend to be more authoritative, neutral and informative. If you need a forceful sounding voice, the research tells us it’s better to choose a male. On the other hand, female voices are associated with helping, understanding and compassion.

For IVR-projects, female voices are more popular than male voices. A female voice is considered to be more calm and soothing. According to some studies, more than half of men (54%) and almost 40% of women believe that a female voice is more soothing. This fact makes female voices more suitable to corporate videos, audio books and explanatory videos.

For e-learning projects, male voices are more preferable than female, because these types of projects involve instructions, and a male voice sounds more persuading than a female one.

The goal of the project

If your project is some sort of “Buy it now”, a male voice will be the winner. Male voices provide authority to this type of commercial. If your goal is to present a new project and show it to customers, why not to use a female voice? It is warm and calm.

If you are on a tight budget, consider that female voices are often cheaper than male voices. And of course if your budget permits, think about hiring a famous voiceover artist with a recognizable voice. This can attract the attention of your audience to your commercial.

Some surveys say that women’s voices are more popular than men’s. This could be caused by the feminization of the digital world. Remember Siri or Alexa’s voices –they are all female.

In reality, a lot of factors come into play when choosing a male or female voice for a recording project. And they are not limited to the product and service, type of project, target audience, budget and country. More and more marketing studies show that the gender of the voice also depends on cultural factors, affinity to some voices from childhood and even upbringing and religion.

Male vs. female voice-overs. Our investigation.

Accent Network decided to conduct its own investigation. We chose a country and a type of voice-over project. We wanted to know what voices were more popular – male or female – in IVR-systems in the Arab World.

Our company contacted embassies, banks and multinationals in many Arabic-speaking countries. Our survey only included institutions that had automatic recordings and we listened to each of them carefully. We spoke to our customers and questioned men and women all over the Arab world.

Our research has shown that there is a clear and increasing trend of using female voices in International Voice Recognition Systems. More than 88 percent were female voices.

Proportion of Male to Female IVR 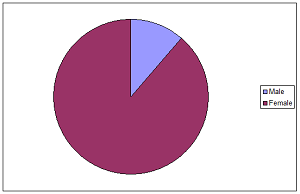 Even in countries where there still is a predominance of Male recorded voices, we had telephone conversations with citizens that we called randomly and we were repeatedly told that it was changing rapidly.

If you still have any doubts on whether it’s better to choose a female or male voice, contact our managers who will use their experience and your specific project to help you make the best choice.